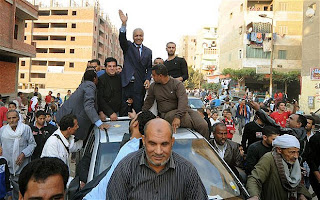 The Islamist Muslim Brotherhood said it would not use its success in Egypt’s parliamentary election to impose its will on the drafting of a new constitution and would work with all rival political groups on the blueprint.The Muslim Brotherhood’s Freedom and Justice Party (FJP) has led after two of the three rounds of voting so far, and the rise of Islamist parties in the poll has prompted Western concern for the future of Egypt’s close ties to Washington and peace with Israel.


“The party’s winning of the majority in the new parliament does not mean going it alone in writing the constitution without consideration for the rights of other Egyptians, or ignoring the political forces which did not get a majority or failed in the parliamentary elections,” said FJP head Mohamed Mursi.


“All political forces and intellectuals in Egypt, regardless of their political and religious allegiances, will take part in writing the constitution,” said Mursi, whose comments were published on the Muslim Brotherhood’s website Tuesday.


The more hardline Islamist al-Nour Party has come second in the voting so far. It is a Salafi group promoting a strict interpretation of Islamic law and its success has raised the prospect of a chamber dominated by Islamists.

Some analysts believe, however, that the Muslim Brotherhood could seek to build a coalition with secular groups. That could ease concerns at home and in the West about the rise of the Islamists in a country whose economy is propped up by tourism.

The election will produce the first Egyptian parliament with popular legitimacy in decades, raising the possibility of friction with the military council which has governed since Mubarak stepped down in February.
The military council has been the focus of street protests held by activists who accuse it of seeking to hold on to power and privilege. Saying they do not want to govern, the generals are due to hand power to an elected president by mid-year.

The party espouses a strict interpretation of Islam in which democracy is subordinate to the Koran.
The party represents Egypt's Salafists and members speak openly about their aim of turning Egypt into a state where personal freedoms, including freedom of speech, women's dress and art, are constrained by Islamic law.
Thousands of protesters at the massive street demonstrations in January and February were calling for such freedoms.

The Nour Party only reluctantly included women as candidates, to comply with election regulations. It put women at the bottom of its lists, represented by flowers since women's photos were deemed inappropriate. It has only recently entered politics.

By contrast, the Muslim Brotherhood, Egypt's largest and best organized political group, was officially banned under Mubarak but established a nationwide network of activists who built a reputation for offering services to the poor. After Mubarak's fall, the group's Freedom and Justice Party campaigned successfully, their organisation and name-recognition giving them a big advantage over newly-formed liberal parties.

Stakes are particularly high since the new parliament is supposed to oversee writing a new constitution.
On Friday the election commisosion said that more than 8 million eligible voters - 62 percent - participated in the first round. But it announced final results in only a few races. It remains unclear when complete final results will be released.

This week's vote, held in nine provinces, will determine about 30 percent of the 498 seats in the People's Assembly, parliament's lower house. Two more rounds, ending in January, will cover Egypt's other 18 provinces.
Egypt, whose economy was battered by the uprising that unseated Mubarak, turned down a $3 billion IMF facility in June, saying it did not need the funds. The ruling generals have also been reluctant to take on debt without a popular mandate.
Source: First Post and Telegraph
by: Farhana Aisyah Natdzri