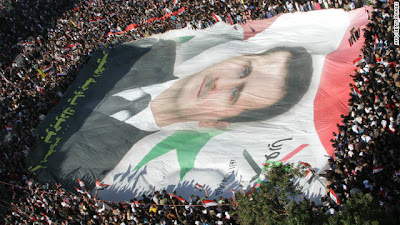 Syria-- World pressure on the Syrian regime escalated Wednesday as Turkey announced tough economic sanctions and a leading U.N. body announced a Friday meeting on the human rights situation.
The Organization of Islamic Cooperation, a worldwide alliance of Muslim nations, met on Wednesday in Saudi Arabia to discuss the bloodshed in Syria, whose government has been widely condemned for its fierce crackdown against protesters.

"Collective punishment methods, besieging cities, bombing mosques, using excessive violence against peaceful demonstrators and killing tens of people every day pointing weapons to their own people with army units following armed gangs such as shabiha are the manifestations of the Syrian administration's lack of understanding of legitimacy," said Turkish Foreign Minister AhmetDavutoglu, who announced a series of sanctions against Syria.

Turkey plans to stop selling and providing weaponry to the Syrian army. It also will prevent the transfer of munitions from third countries to Syria via Turkey, Davutoglu said.
The government is halting transactions with Syria's Central Bank and freezing Syrian government financial possessions in Turkey. It is suspending a credit agreement to finance infrastructure projects in Syria and credit relations with the Syria government.

Turkey will impose a travel ban on some members of the Syrian leadership and freeze their possessions, as well. A similar ban will be imposed on some Syrian businessmen in a position to support the Bashar al-Assad regime.

Turkey has been one of Syria's largest trading partners and once had close ties to the Syrian regime. But the Turkish government has been vocal in condemning the al-Assad government's assault on protesters. 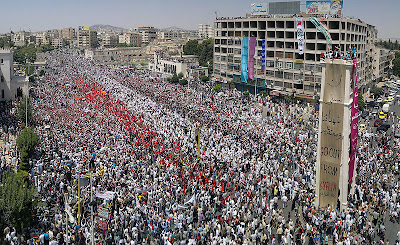 A U.S. official commended Turkey, saying the "leadership shown by Turkey in response to the brutality and violation of the fundamental rights of the Syrian people will isolate the Assad regime and send a strong message to Assad and his circle that their actions are unacceptable and will not be tolerated."

"The measures announced by the Turkish government today will undoubtedly increase the pressure on the Syrian regime, and we continue to call on other governments to join the chorus of condemnation and pressure against the Assad regime so that the peaceful and democratic aspirations of the Syrian people can be realized. President Obama has coordinated closely with Prime Minister (Recep Tayyip) Erdogan throughout the crisis in Syria and will continue to do so going forward," National Security Council spokesman Tommy Vietor said.

Earlier this month, the United Nations said well over 3,500 people have died during the unrest. Human rights groups have reported many deaths since then. Syria's government has consistently blamed armed gangs for the violence and said security forces are protecting the people.
At least 19 people were killed in Syria on Wednesday, according to the Local Coordination Committees of Syria, an activist group. Ten died in Idlibin the northwest, seven in Homs and two in Hama, both in the west. Two woman and two children were among those killed. Injuries also were reported in Homs and Idlib.

tekanan turki ke atas syria
Posted by Panitia3p at 10:39 AM