Brazil has announced it is fining US oil company Chevron $28m (£17.9m) for causing an oil spill off the coast of Rio de Janeiro.
Chevron has accepted responsibility, saying it had underestimated the pressure of underwater oil deposits while drilling.
Brazilian Environment Minister Izabella Teixeira said Chevron could face further fines if an investigation into the spill revealed more infractions.
Chevron says the leak has been plugged.
The head of Chevron's Brazil operation, George Buck, said the company had underestimated the pressure of underwater oil deposits while drilling, causing oil to rush up the bore hole and seep into the surrounding seabed.
Mr Buck said the leak had been plugged, but that there continued to be a residual oil flow from undersea rock near the well in the Frade oil project, 370km (230 miles) off the Brazilian coast. 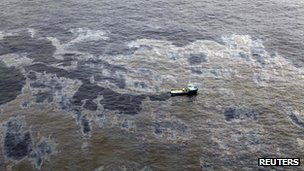 'Serious accident'
According to Brazil's National Petroleum Agency (ANP), the leak released between 200 and 330 barrels a day at the height of the spill.
The head of the ANP, Haroldo, Lima said the accident was "serious, but not major".
He said there was "no comparison" between this spill and last year's disaster at BP's Macondo well in the Gulf of Mexico, where 11 people died and some 3,000 barrels a day were leaked.
Police environment experts have been trying to assess the scale of the latest spill.
They have also questioned the methods Chevron was using to clean up the spill.
Head of the Federal Police Environmental Division Fabio Scliar said the company was pushing the oil to the bottom of the sea, rather than gathering it, putting corals in the area at risk of pollution.
In recent years Brazil has discovered billions of barrels of oil in deep water that could make it one of the world's top five producers.
So far there has been little public debate about the environmental dangers of offshore drilling.
Political discussion has instead focused on how future oil revenues should be divided between different states.
Sumber: BBC News
Disediakan oleh : MUHAMMAD YUSRI BIN ABDUL AZIZ