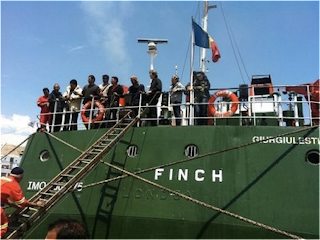 KUALA LUMPUR (AFP) – A Malaysian aid ship attempting to land in Gaza after being warned off by Israeli naval forces last week has been forced to abort its mission after engine trouble, activists said.
Matthias Chang, who is heading the mission for the Perdana Global Peace Foundation, told AFP on Monday that the MV Finch was now stuck six nautical miles from Egypt's El-Arish port.
"At about 5:30pm local time (0330 GMT), our vessel developed engine trouble and we lost our steering capability, so we had to stop our attempt to reach Gaza by sea," he said.


"However, the Egyptian foreign minister has given his assurance that we will be allowed to unload our humanitarian cargo and that it will be taken by the United Nations Relief and Works Agency into Gaza," Chang said, adding that Egypt is bound by international law to lead the vessel to safety.


"Although we were not able to reach Gaza by sea, we have achieved our aim of breaking the Israeli embargo by breaching their protection zone last Monday and if the Egyptians deliver on their promise, we will have also achieved our aim of delivering aid to Gaza," Chang said.
Perdana Foundation officials said the MV Finch left Greece on May 11, carrying plastic pipes to help restore the sewage system in Gaza.


However, Israeli naval forces fired warning shots at the vessel when it was in Israeli waters, about 400 metres (yards) from Gaza, and forced the ship into Egyptian waters.
Chang said the 12 activists and crew onboard the ship, had on Monday told Egyptian authorities to either allow the vessel to dock and unload its aid or they would carry on to Gaza by sea.


As the Egyptians did not respond to the ultimatum, Chang said the ship left the waters off El-Arish, heading towards Israeli waters.
Malaysian journalist Alang Bendahara, who was also aboard the vessel, told AFP the aid ship was escorted by an Egyptian navy patrol vessel, which cautioned that Israel's naval forces could attack if they entered Israeli waters.


"The mood onboard the ship was very subdued as we were contemplating what would happen but it was clear that everyone was determined to continue so that we could get this much needed aid to Gaza," he said.
An official from the foundation Samsudin Hitam confirmed that Egypt has promised to allow the MV Finch to dock and unload its cargo on Tuesday.
Malaysia's foreign minister Anifah Aman said in a statement Monday that he had spoken to his Egyptian counterpart to speed permission for the vessel to dock and that the minister had "agreed to assist in the matter".


The Perdana Foundation is headed by former Malaysian premier Mahathir Mohamad, an 85-year-old firebrand who was a strident critic of the West and Israel over the treatment of Palestinians during his two decades in power.


The organisation was also involved in the first "Freedom Flotilla," a May 2010 attempt to break the Israeli blockade on Gaza, which ended in disaster when naval commandos raided the aid ships, killing nine Turks on board one of the vessels.
The incident sparked heavy criticism of Israel and led to a sharp deterioration in ties between Turkey and the Jewish state.

Sumber: Yahoo News
Posted by Panitia3p at 9:52 AM